I can only chew coconut on one side of my mouth.
Half is nestled behind my wisdom teeth,
to prize out,
shriveled and raw,
when cultural identity comes under question.
Yet after all this time,
the taste is still foreign to my tongue.
My mouth is tentative to taste.
Even more so
to swallow.

Half-caste;
A Countdown ‘pick and mix’
of Europe, East Asia and the Pacific.
I’ve learnt to ignore my trachea’s aggravation
while exhaling coconut’s indigenous compilation.
Its deep consonants, rolling vowels.
No wonder I stutter
and stammer.
My larynx is stuck in time zones,
groggy, despite the jet-lag pills.
Covered by vocal cords rubbing out of phase.

On the four-day trip
from the islands to Otorohanga
British missionaries adjusted the screws of my ancestors’ voice boxes.
They straightened out their tongues
and tightened the muscles surrounding their jaws.
When they lodged their forceps down their throats, they replied,
Au na vosa mada ga na noqu dina,
I will only speak my truth.

My grandmother’s adolescent years
were spent in the Ovalau district convent.
Long legs and a short temper for survival.
Brought up with
soulful hymns of Isa Lei, and
farewell waves,
for a father with whisky in one hand and a cigarette in the other.
She looked to the mainland,
sun-stained hills and hidden valleys of Viti Levu.
For she knew her life elsewhere may soon be underwater.

A place where years later,
her children were raised
up,
each perched on a knee.
Under the coconut tree
of opportunity
pecking at the palm fronds,
dancing till daybreak.
Oblivious to their retreating umbilical cord.
The placenta of their homeland growing weaker.
A connection seen as something
simply to bury beside the chicken coop.

Many years later,
she picked at the holes in my jeans,
and complained of New Zealand fruits’ bland aftertaste.
“Ovalau has the sweetest papaya,” she’d say

In New Zealand
I know karma chameleon.
Stagnant seas of red, gold and green.
I skid stones across the surface,
but there is no ripple to be born on an ocean iced-over.
My culture club cries into the microphone,
you come and go.

Defined by an archaic notion that we are a percentage of ethnicities,
the biggest of which we own as our own,
the others we disregard.
Multiculturalism has left me utterly confused.
Embrace all,
be one,
be all,
embrace one.

I envy my father.

Who can confidently tick ‘Pasifika – Fijian’
on every form.
And his father,
who did so with a blunt pencil lodged between knobby knuckles,
a cup of coffee held between his knees,
and corn he’d extracted from the cob
kernel
by kernel
between his teeth.
Imagine the audacity
for a mixed-race girl to do the same.

P is for Pasilangi.
I is an identity unresolved.
I’m too white for a brown title,
too brown for a white one.
Left to constantly negotiate the terms of my identity,
exchanging chips with reality.
Today I’ll be white.
A child can tell you the colour of their lips,
yet the colour of their culture will require a spectrum of hues.
Check boxes to reach a wider demographic.

Teach me how to exhale in my origin language.
I want my lungs to accept the ocean’s air as their own
and my diaphragm to feel snug below my rib cage.
The carved Lali of my lungs
will not beat hollow
but filled with vibrations.
Hymns of Isa Lei.
Off pitch, but that’s okay.
I can’t wait for the day that silence is foreign to the tongue,
and coconut does not feel it has to hide behind my wisdom teeth. 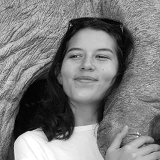