Ballad of the computer lab

say dewdrop. say honeysuckle. say your own
name, over & over til it is only saliva. i want only to be compound.
now are you getting it? i am scared all that will be left is
crumbs. i am scared there will be a diagnosis of something & i will
think of course, i saw all the signs so many years ago. the computer
labs at school are still plastered with posters from the 90s,
all email etiquette & what does html stand for. i do not
believe you will pay for your sins & there are
not many things in which i do not believe. it might come as a knock on
the door or dead sparrow caught in the chimney. a letter, soggy
from the postie’s sweaty hands. a first kiss,
all tongue & no air. i am not the messenger, so do not
hold me accountable for the word the trees send. all they have done
is shelter me, & i did not ask even that. say benchtop.
say switchblade. say doorhinge. the knots they taught you in an old scout
den unravel. floorboards peel up like so much roasted skin. posters
from the 90s glow goldenrod & curl like ribbons stripped from the bone.
this is the darkest winter i’ve known yet & have spent much
time watching the past going up in smoke. in the house across the bay,
identical twins watch the flames. in the house on the hill,
dead girl’s friend watches the flames. hooked up to a machine sapping their
blood, the well-intentioned fool watches the flames. say shortcut. say beachside.
say dommage, dommage, dommage. tell your dead stories over & over,
til they are saliva sprayed across the room, or crumbs through
the forest, sourdough all through the moulder & green, over the logs &
seeping into the marsh. i scrape tarmac from roads with switchblade,
bleed till i drip honeysuckle. & i have spent so much
time watching the past buckle to
flame. i do not believe you will pay for your sins.
i’ll give you half anyway. 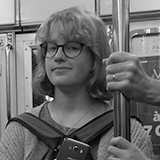