An hour earlier a woman shoves a girl
painted black, white, and purple
down with the butt of her flagpole
and with spit flying she screams
a history lesson: you’ve got a lot to learn.
It’s a community made up of the invisible
fighting to hold funeral marches.
Honey, you’re naïve for wanting to be visible,
acknowledged, recognized, and targeted.
Being seen got some of us attacked, left to die.
We don’t accept people like you.
They said, back in the day,
L was for the left over girls who couldn’t get a guy
G was for the goners pushed onto train tracks
B was for the backs stabbed by both sides
T was for –
Times have changed, the girl sneers,
and the letters crumble apart.
No funeral marches to wear black to,
it’s a rainbow, she points, all the colours and all the letters.
The woman scoffs,
you don’t belong here.
Grow up now, princess!
People like you don’t die.
We do.
Now, it’s Orlando, 12 days in.
Of all the colours, it’s red on the walls and the floor.
Today’s goners shot in the back and terrified.
Down the street a woman carries a flag,
its weight rests across her shoulder. 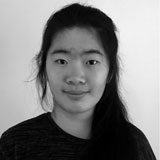