No one ever tells us – Isabelle McNeur

No one ever tells us

until i hit twelve,
the muddle of new, yet-to-be-explored tension when the seating plan got announced
the flitting not-glances as everyone held their towel up too tight in the changing rooms
the dry-mouthed wrestling in gym class, christmas cards with rows of kisses
girls being walked home and guys doing the walking, both looking anywhere but each other –
i thought that you could only fall into one of two categories.

i had been taught from birth by every movie, every book I pretended to turn up my nose at
but started going through it when their backs were turned, not knowing what i was searching
for –
to daydream about white veils and a wedding garter hidden daintily out of the way
and, of course, the groom, forever smiling, maybe tearing up at the end of the aisle.
it has been rubbed into me, however well-intentioned, by giggled sleepover conversations,
by my parents, by people in the street who don’t try very hard not to smirk
at my friend from the boys’ school up the street who keeps brushing my palm with his.

(it’s not until years later that i realize that yes, i did want the overly clammy wrap of his hand, but
that particular clutch at the back of my throat was for the friend who had been on the other side
of me: oblivious, ruby-lipped, and straining the shirt I had let her borrow when we had shared a
changing room together an hour before.)

i sometimes think about shearing my hair off, pulling on hoodies instead of sloping dresses
maybe get a metal stud: tongue, nose, a row of silver cuffs along my eyebrow,
let my pants bag around my hips, stop wearing lipstick
to see if people will stop asking me why i don’t ‘look the part’.

pick one or the other, they say,
and god knows i used to, but now i’ve watched the lines blur, and not the ones i ever expected:
shame-faced boys pull their belts achingly tight so they don’t droop and reveal the rim of lace.
not facing the mirror, girls hurriedly bind their chests before their shift changes.
they shower in the dark, stumbling and skidding, because if the light was on
they couldn’t get to a towel fast enough without getting smacked with their reflection.
and they would rather risk a bashed-open head on the wet sink than turn on the light
and see their body locked up in front of them, aching and wrong.

(some people falter before going into public bathrooms. there has never just been one or the other.)

it has been ground into me: pick one.
either the hard, jagged lines of the shoulders and the bolt of the jaw,
the lovely protruding of the adam’s apple,
the grate of stubble, the gangled elbows, the blunt fingers, all angles and edges.
or the waterfall of collarbones crested above the swell of her breasts
that strain her shirt perfectly, the tangent of curved hips,
the flash of thigh above the skirt, charcoal smudges of mascara,
the uninterrupted flow of her throat.

(they both have the soft sweep of their eyelashes on their cheek. the lift of their shirts when they
reach for something. the burst on the end of their laughs. and tongues always feel the same in
my mouth, whether they’re ringed by stubble or lips smeared with artificial red.)

one or the other or you’re greedy, or a liar, or a sinner, or all of the above.
an impatient mother of a whining child with fistfuls of two types of candy at the checkout,
and her fingers will leave marks on your wrist that you will rub over later:
five raised lines reminding you that you cannot have both. 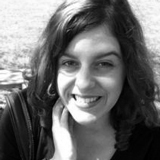